A Short History of the School

The earliest records of education in the parishes of Barkston and Syston go back to the year 1718. In that year Mrs Selina Towers provided an endowment of £27 per annum for schooling and apprenticing poor children in Barkston, and the Dame Margaret Thorold Charity made an endowment of £5 per annum for books and teaching for the children of Syston.

The Barkston school and Master's house were rebuilt in 1835 on land donated by Mrs Houblon Newton, money for the work being raised by subscription. The Syston school and school house were built around 1830 by the Dame Margaret Thorold Charity.

The schools continued separately as CE (Aided) schools until, in 1959, consideration was given to joining them in accordance with the Kesteven Council's Education Plan. After lengthy discussions with the Department of Education and Science and all authorities concerned it was decided that a "Three class sixty" school should be provided as an extension to the existing Barkston School . The new joint school opened in April 1969.

The Diocesan contribution to this scheme was provided in part from Section 86 monies arising from the sale of Cranwell School and in the main by the Dame Margaret Thorold Charity which took up a loan backed by the proceeds of the sale of Syston school and house.

In recent years the children from Aisby, Belton, Brandon, Culverthorpe, Gelston, Heydour, Honington, Hough on the Hill, Oasby and Welby have been admitted to Barkston and Syston CE School.

The parents of the children attending the school in the Spring Term of 1993 voted to seek self governing status. The governors were successful with their proposals and the school was incorporated as Grant Maintained on 1st September 1994.

Following the abolition of Grant Maintained Schools, the governors decided that the school should revert to its Aided status with effect from 1st September 1999.

Richard Eveleigh was a pupil at Barkston and Syston CE School from 1980 until 1985.
His mother - Mrs Susanne Govan - presented the school with a seat in his memory as Richard died in 2008 aged 32 years old.

The school held a special act of collective worship to dedicate the seat and Rev Lesley gave a blessing.

Mrs Govan has written a short book about Richard.  If you would like to know more about him, please ask Mrs Drayton and she will happily provide you with the book. 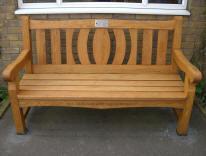 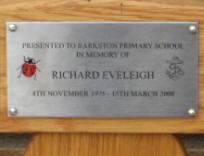 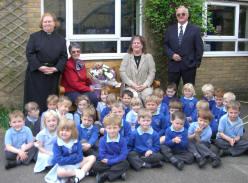 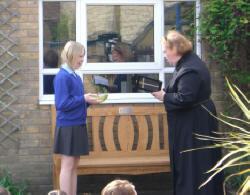 In 2010 the school celebrated its 175th Anniversary.

Unfortunately not the ones with chocolate chips.

Some cookies are necessary in order to make this website function correctly. These are set by default and whilst you can block or delete them by changing your browser settings, some functionality such as being able to log in to the website will not work if you do this. The necessary cookies set on this website are as follows:

A 'sessionid' token is required for logging in to the website and we also use a 'crfstoken' token to prevent cross site request forgery.

Cookies that are not necessary to make the website work, but which enable additional functionality, can also be set. By default these cookies are disabled, but you can choose to enable them below: